Realize the power of community, real or virtual, for your nonprofit in Pittsburgh.


In 1998—although he had been involved in fundraising and PR for hospitals and service providers in the past—his community involvement sparked with volunteer work and leadership in his own Deutschtown neighborhood.  Since then he has facilitated and witnessed many success stories of community building.

His work for a variety of nonprofits has ranged from marketing and PR campaigns to fund raising and branding.

In the past decade Randy has also consulted with several Main Streets communities in Pittsburgh.

Not only is Randy organized and creative, but he also is fun to work with. Notable is Randy’s talent in marketing neighborhoods, events and programs. While his projects are rooted in data and analysis, he presents them in a way that his clients can understand, implement and enjoy. Top qualities: Great Results, On Time, Creative — Alida Baker., technical assistance consultant [on LinkedIn]

A PORTFOLIO  of 12 community building solutions 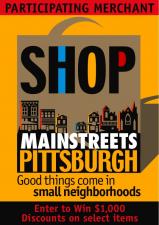 This innovative, yet simple project enhanced 18 businesses in two Pittsburgh districts—Bloomfield and The Strip District—by growing their use of technology to improve their efficiency and bottom line.

This pilot project project was adopted and scaled larger by the URA and the Northside Community Development Fund.   [Project description and report PDF]

Thank you for your very interesting and informative grant report on Phase One of the Technology Seeding Project. It provided detailed information on each engagement and good assessments of positive and less positive outcomes, and reasons for each.  Thank you for taking the time and putting in the effort for the project.— Hank Beukema, ED, McCune Foundation.

Randy has worked with Neighbors in the Strip (NITS) on several projects over nearly a decade, including promotion and fund raising plans.  He also performed two market analyses.

The first was a feasibility study for a proposed public market hall which later became Pittsburgh Public Market.  Another study consolidated diverse data and other market research under one cover for the NITS business plan.  It also continues to provide valuable data and strategies to businesses and developers.

More about our fund raising & friend-raising.

The 5th annual, 3-day festival expanded its outreach and promotion efforts with Randy serving as Mainstreets manager. Results: new cultural partners, 10,000+ attendance, and two new major sponsors.  Sponsorships and earned income exceeded previous years and the festival made it’s first ever profit.  Many businesses had their best sales of the year. 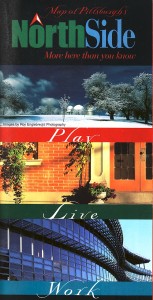 Part of a volunteer team of creative talents and leadership on the Northside, Randy helped to build the first co-op promotional and branding effort for 14 communities representing 1/5 of the city’s population.  The effort included:

See also NEWS for other projects and clients

Working with a coalition of health and human service providers, Randy served as the neighborhood representative on the team. The result was a first ever directory of more than 250 providers, CDCs, churches, schools and more. Five years later the directory was still in use by various stakeholders, with more than 1,000 copies in circulation.

Randy wrote several successful grant proposals for two Mainstreets Pittsburgh communities: Squirrel Hill and Bloomfield. Total fund raising for these two communities amounted to more than $160,000, including from the URA, City Council and the Pennsylvania Department of Community and Economic Development. 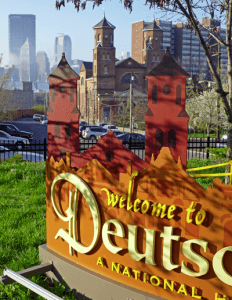 A resident and business owner in Deutschtown, Randy collaborates with other leaders to stage and promote their house tours, with great success.  The tours were staged primarily to encourage continued revitalization through investment in both residential and commercial properties.

Results: 675 people toured, a $10,000 “profit” going to the work of the CDC and a new partnership with the Community Design Center’s first ever Design Fair.

And he was part of a team that redesigned and rebuilt the Deutschtown community website and a new Facebook page, which Randy co-administers and posts regularly to as a volunteer. 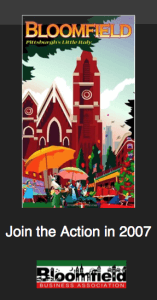 Randy, as Mainstreets manager, and a bank manager/board member developed a “more business like” strategy to recruit membership for the Bloomfield Business Association (BBA). This included: new print collateral [PDF draft], a recruitment team strategy and a system for tracking progress.

As the Main Streets manager and experienced writer, Randy developed more concise newsletters [PDF] more quickly and improved distribution—by courier, fax and e-mail. He also worked with a web designer to develop a more effective website. Result: more effective and consistent communication with and promotion of the businesses.

Randy led the charge to plant street trees in 3 urban neighborhoods, as well as community gardens. (In addition, one community now proudly displays colorful district identity banners.)  Result: more than 100 trees and 16 street banners in two communities, with more of each to come in the third neighborhood.

In Bloomfield, Squirrel Hill and Deutschtown

Starting in the late 1990s Randy began active volunteering in his Northside community. He served on strategic committees and took on leadership roles. Later, taking the knowledge he gained from this, he worked with other nonprofits to help build their volunteer bases and build wider, active participation.

Find out how we can provide creative and strategic marketing solutions for your community. Call 412-322-9720 or email today.