In the last 3 months Randy has provided pro bono support for two new businesses in his community. It’s because he’s part of a team working to revitalize his neighborhood business district.

His simple, quick and buzz-creating tools are good photography and Facebook—both enhanced, perhaps, by his reputation for being a community maven and activist.

So Randy introduced himself to the owners of Farmer’s Daughter Flowers, an artistic floral design shop opening in his Deutschtown neighborhood. He offered to help promote their Grand Opening the next day with colorful posts to two neighborhood Facebook pages with more than 1,700 followers.

Now, that may seem a bit late for marketing a launch.  But he knew from experience that a strong post would go viral quickly and in time for the Opening the next morning.

Creating a quick buzz for business launches in the neighborhood


Randy Strothman & Associates had already launched two new businesses on the street: Bistro To Go in 2007 and Priory Fine Pastries in 2005. They both proved to be great successes—in the era before social media. But today social media marketing can be a powerful tool for business launches.  And Randy aimed to be a neo-Paul Revere for the new Farmer’s Daughter Flowers: “The flowers are coming!! The flowers are coming!!” 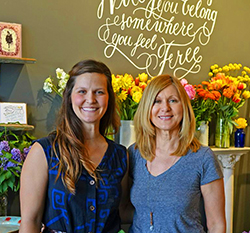 It took 15 minutes for photography, a half hour in Photoshop, and then quick postings on two community Facebook pages. On Deutschtown’s Facebook page 40 people Liked the photos and post and 8 people commented. More importantly there were 19 Shares. On the second page, 52 people Liked, 5 people commented. That may not seem like a lot, but Randy heard a buzz starting and knew the community mavens would do the rest…

“Houston, we have lift off!”

That was enough to get a big buzz going.  The next day customers swamped Farmer’s Daughter Flowers… and decimated the inventory by the end of Opening Day.  The owners had to restock heavily the next morning. That’s the sweet fragrance of success!

And a second business launch in Deutschtown

A second business had opened 2 months earlier. Randy used the same technique for Arnold’s Tea, just across the street from the new floral shop.

On the second community page, there were 55 Likes, and 5 Comments. Again, the buzz had begun and continues today.  Ah, the sweet taste of success!

Get in touch if you want to create a profitable buzz for your business launch!