We believe in empowering clients when possible by setting up marketing platforms that they can/could take command of. Not many do, though.

But Zamir Zahavi most definitely has taken command of his Internet marketing.  And he is constantly refining his business and brand—“Pittsburgh’s oldest and friendliest tavern.”  As a result of his (and some of our efforts), his revenues have jumped 20% each year for the last 4 years. How did that happen?

Staking out territory and a brand on the Internet 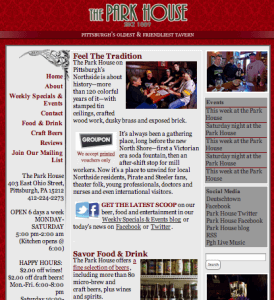 In 2008 Zamir had no Internet presence and no clear marketing strategy.  His niche in the marketplace was not clearly defined.  He asked us to get him moving in the right direction. So we created an identity and a new WordPress/CMS marketing website.

We jokingly call his website a “triple threat” because—besides having a 24/7 presence on the Internet—it enables him to execute weekly three marketing tactics simultaneously:  1) an Events & Specials blog post, 2) emails to hundreds of fans, and 3) a post to Facebook.  All in one step by publishing his blog post. (He also updates his menu and beer selection himself.) 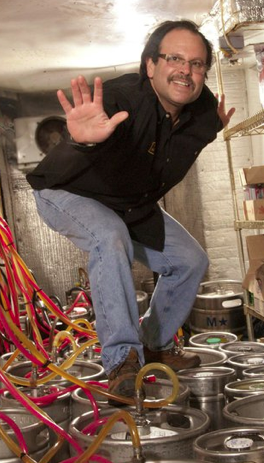 BTW, we should point out that his weekly blog posts are done with a flair that we could never replicate.  They are colorful and witty in writing style, plus embellished with colorful type!  This too helps to support his brand of fun and “friendliest.”

In 2013 he averages 1,200+ Unique Visitors to his website every month. His Park House Facebook page following is 850+, and he also has a Reach of 4,500 to 5,000 people. He gets good social media interaction because of his many loyal and enthusiastic fans. More recently we also added Twitter to his online marketing toolkit (and Hootsuite, so he could post simultaneously to Facebook and Twitter) and he has 200+ followers there.

In 2008 we had done a brand audit for him by surveying several dozen customers. It revealed some negative perceptions of quality of food and cleanliness—which Zamir addressed in the coming years. This included eliminating deep frying and smoking. 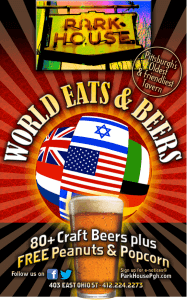 Perhaps most importantly, he has chosen to take ‘the road less traveled’ by Pittsburgh bars, pubs and taverns—by offering menu items and craft beers with an international flair.  As part of that identity, he refers to himself as the ”falafel master.” This was a bold step, but it’s paying off. On May 18th he posted this:  “I haven’t cooked a single burger or chicken breast tonight. It was a falafel, golani, gyro and hummus night.”

Now customers are seeking him out for an international cuisine and craft beer selection—not the same-old-same-old bar food.  (Did we mention that he speaks 5 languages and has lived on 3 continents?!)

And finally, in support of his “friendly” out-of-the-box brand, we tapped the talents of local illustrator, Dan Wintermantel, to create some colorful posters and sidewalk signage.

Can we empower you to take charge of at least some of your small business marketing efforts?  Or you can hire us to do it for you. 🙂