Over the last 10 years Randy Strothman has helped to produce or witnessed several success stories in marketing and branding historic communities and Main Streets. In these communities branding is about somehow embracing the rich past and the tentative present—along with a clear vision for the future.

In the Pittsburgh area here are FOUR EXAMPLES, ranging from a new brand launch in 2010 to one that began 40 years ago.  Perhaps these provide some insights and inspiration for your own community’s marketing.

In early 2010 this small historic town east of Pittsburgh launched a Main Street branding effort with Randy Strothman and two talented associates—both with marketing and branding experience, as well as fine design track records. This community branding project is a component of a larger streetscape, gateways and infrastructure improvement strategy for the future of the town.

Early in the Irwin identity process, Randy suggested that perhaps what historic communities need to do is something comparable to what Volkswagen did for the beetle:  reinvigorate “the old tried and true” for today.

About the same time the Pennsylvania Downtown Center announced its 2010 conference theme:  “The Future of the Past.”  Meanwhile, here is the Irwin branding process and the results…

Community buy-in is so important with any kind of community branding, marketing or development effort. People can be very passionate, opinionated and defensive for their community. So the process of decision making can be as important as the end result.  Here in Irwin, a savvy Steering Committtee, a focus group and a community opinion survey helped to assure that the logo design would meet approval and be embraced going forward.  In this case 95% of the people surveyed opted for the final choice of two community logo options.

This project also intentionally tapped the diverse styles of two designers in two different settings. No cross-fertilization allowed. That gave the Irwin committee 4 distinctly different logo style options to choose from initially, plus two dozen tagline options.  Once they chose a design the creative team offered 6 different color schemes to choose from. The creative choices are all about how best to reflect the personality of and vision for their community—and appeal to their target audiences.

After two and a half months of research, discussion, designing and strategizing, the branding and marketing deliverables for the Irwin community include:

This FlexTeam project launched in January and wrapped up in mid April. 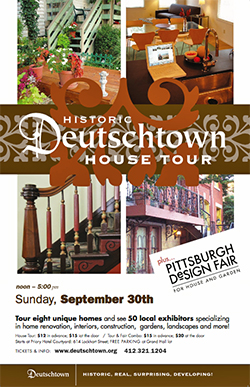 In Randy Strothman’s own community of Deutschtown, redevelopment and re-branding are working hand in hand to create positive momentum in a stressed urban environment—disrupted decades ago by an 8-lane freeway project and flight to the suburbs.  While the real “heavy lifting” is about investment and renovation—the community loves dumpsters and the music of circular saws and hammers—branding and marketing have encouraged that in recent years.

One of the biggest boosts for the brand image of the community was the staging of its first historic house tour in 2005.  Deutschtown had witnessed the success of nearby neighborhoods with their tours and decided to go for it.  Eight wonderfully restored homes were featured, 675 pleasantly surprised people toured. The publicity helped not only with the image challenge, but also with rebranding and renaming of the community—from East Allegheny to Deutschtown.

Bonus: this fund raising effort netted $10,000 for the community council for ongoing renovation.  2010 will be the third tour for Deutschtown. 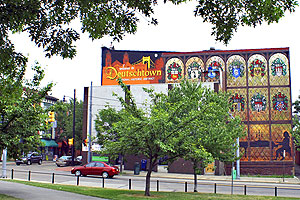 Plus, new signage and a large German-themed mural convey the new message and brand to thousands of commuters everyday at the gateways to the community.

And the opening of several popular new businesses helped to spin the district in the right direction and generated additional positive publicity.

In the first week of April, Deutschtown neighbors Rachel Booth and Randy added a new lively Facebook page and an e-newsletter to the marketing tactics toolkit for the community. Both in anticipation of the Fall 2011 House Tour of historic Deutschtown.  This enables the community to provide instant and ongoing information to the world. Check out the Post-Gazette blog of 4/21/11 spotlighting the new Facebook page) 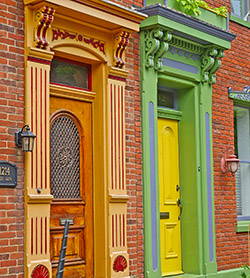 Part of the inspiration for Deutschtown’s launch of a house tour was their success at fund raising and branding for neighboring Mexican War Streets, which has staged fund raising tours for more than 40 years.  It no longer surprises Randy at all that when he says he’s from the Northside of Pittsburgh that they inevitably say “Oh, Mexican War Streets?”

This neighborhood has shaped a strong brand through this and other efforts, particularly the ongoing renovation of homes—one friend has restored more than 30 there!—and most recently a large new townhouse development that is part of a revitalization of a critical traffic artery through the community. 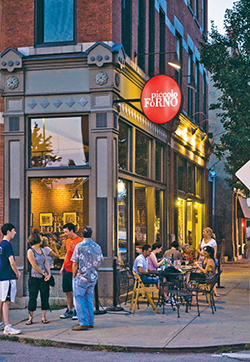 A final example is the creation 10 years ago of a marketing concept—by Wall-to-Wall Studios and Lawrenceville Corporation— for redeveloping the business corridor for Lawrenceville and the Strip District:  the 16:62 Design Zone. It was a visionary branding and marketing effort the community hoped would shape a vibrant, arts-driven future here.

Over time this strategy has attracted scores of new, independent, creative businesses—initially slowly, but then building momentum as more and more of the targeted types of businesses invested.

The websites for Lawrenceville and the Strip District also do a stellar job of branding, positioning and marketing.

In addition to websites, many communities are using Facebook and posting regularly. Take a look at three in action…

To create a success story for your community contact Randy Strothman & Associates.